Shipping your Eventide to us for servicing

We love Eventide and their gear, though we’ve stopped servicing some of the early models. Here’s a partial history of that landmark company, with typical costs for the models that we service.

Eventide Clockworks PS-101 Instant Phaser
The Eventide Clockworks PS-101 Instant Phaser
Eventide began in the basement of a small New York small studio building tape machine locators, first for their own studio, and then for Ampex. In 1971, their first products were released — the Instant Phaser (all analog), and the relatively rare 1745 and 1745A Digital Delays. (Those early versions used shift registers; the later 1745M, which is more often seen, used RAM. The 1745M’s optional pitch change module, though it had no deglitch circuit and thus had obvious artifacts, was an important first — the first Harmonizer was born, though it hadn’t yet been named.) The Instant Phaser was the first outboard device to emulate tape flanging, formerly an awkward process that required two tape machines. Phasing sounds different than flanging — most would say inferior. Because it is based on phase shift, being capacitor based, the peaks and notches are unrelated harmonically and acoustically, and shallower. Still, phasing is effective, and is similar to flanging. And the PS-101 was truly “instant” — you simply mounted it in a rack and patched it in. In my opinion this was the first true “effects box”. From somewhere, our shop has two yellowed blueprints of the original the schematic (very informally drafted). One of them should be in a museum! Typical refurb cost including recap, lamp replacement, and general servicing and calibration is about $570.00.
The FL201 Instant Flanger (What is Flanging?)
The FL-201, the first “flanger in a box”, shipped in 1975. It boasted an envelope follower, manual flange control, remote control voltage input, and Panasonic MN3005 bucket brigade chips that gave true time delay, not just phase delay. Though it can’t compare to the Marshall Time Modulator (which came a few years later) this is an excellent, great sounding unit. It stands the test of time and is sought after by gear collectors. Typical refurb cost including recap, general servicing, and calibration is about $695.00. 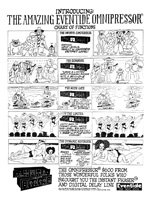 Omnipressor Chart of Functions
The 2826 and 2830 Omnipressors, sold in the early and mid 1970’s, are favorites around our shop though they are not widely known or well understood. Described as a “compressor with attitude” by Eventide, the Omnipressor was a compressor, limiter, gate, expander, and more. This cool looking piece had unusual capabilities. Infinite compression yielded constant output level regardless of input level changes. Dynamic reversal flipped the relatively low level attack and decay with higher level program material, and could be used to make a voice track sound “backwards”. Of course, they could also be used for conventional compressing, limiting, and gating tasks. Early units, identified by their 3 lamps above a white meter, utilized peak detectors and VCA modules that were made by dbx. The more common later version (with banks of white push buttons) retained the dbx VCA but used a home grown detector circuit. They listed for about $600 in the 70’s and are worth many times that now. Period sales brochures and ads included a series of funny, clever cartoons that helped explain the unusual capabilities of the Omnipressor. (All the Eventide manuals are excellent, with detailed operation and theory sections, and complete schematics. Many contain interesting and humorous passages.)

Service costs for the Instant Phaser, Instant Flanger, and Omnipressor can vary. Faulty switch assemblies can add expense, and Omnipressors often have faulty meters, which increases repair cost. (The switches are an unusual type that are no longer made, but we have a good stock of new and used replacements.) We stock all the parts for these units, including the Reticon CCD chips in the Flanger and the dbx modules in the Omnipressor. These are valuable units, well worth the cost of servicing. Please note that all declined Eventide repairs are subject to a testing and evaluation fee. 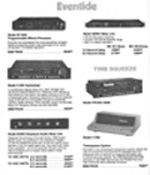 There were other late 70’s products. The Monstermat was not so successful scheme to improve the sound quality of radio station cart machines. Better received was the BD955 broadcast obscenity delay, which allowed the producer or engineer of a talk show to mute the words telephone callers without interrupting the program. The first version used 160 RAM chips!

In 1975 the H910 Harmonizer was released, the first digital product since the 1745M. The H910 was the first dedicated harmonizer, and I have a strong personal connection with this model. In 1978, when I worked at United/Western Studios in Hollywood, Rodney Lovett and I set up an H910 and a mic in the Studio 7 control room, rigged a phone patch circuit to send the MCI console’s output into the phone line, and with the H910 in pitch change mode approximating the voice of a Martian, phoned 50,000 watt KMPC 710. Dave Hull (“The Hullabalooer”) was doing his “Love Lines” show, in which he juggled phone lines to hook up L.A. singles. I played the part of Nardo who was calling from his space ship near earth, seeking female companionship. Meanwhile, back in the tech shop, we had a 2-track recorder connected to a radio, and recorded the results. To hear the original recording, click here.

Again, the H910 was the first true studio pitch changer. Eventide’s de-glitch circuit was still a few years away, but you got dual outputs, each with short, selectable delay times. The dbx type II noise reduction cards on the input and outputs allowed a whole 90 db of dynamic range. Though we no longer service the H910, we stock many of its original parts.

I believe that the Eventide H949 Harmonizer hit the market in 1980. Its many improvements over the H910 included “micro” pitch change mode, two pitch change algorithms (neither sounded perfect, but at least the user had a choice), a basic flange function, up to .393 seconds of delay, and “Reverse” mode, which played a stored sample backwards.

Units with serial numbers above 1606 could be fitted with the optional “Lupine” LU618, the world’s first degitch circuit for pitch change. (Early pitch change circuits “spliced” the waveform, with additional splices at extended pitch change settings. This electronic splicing produced periodic clicks. The algorithm on the Lupine card (whose name came from a Monty Python sketch) selected splice points at equal voltage levels, greatly reducing pitch change artifacts.) An H949 with a deglitch card will be marked “option: ALG-3” on its serial number badge.

Another interesting Harmonizer option was the HK940, a two octave keyboard for external control of the H910 and H949. Few of these units survive — if you own one, you’re quite fortunate! For a cool trip down memory lane, check out this original H949 sales brochure. As with the H910, dbx type II cards were used to increase dynamic range. We no longer service H949’s, but stock many hard to find parts.

As with the H910, dbx type II cards were used to increase dynamic range. Like the H910, we no longer service H949’s, but stock many hard to find parts.

We service all versions of the H3000 and H3500 and can update the program chip sets. Typical service cost is $820.00. This is a labor intensive servicing that includes power supply recap, cleaning any intermittent soft key switches, power supply connector replacement and upgrade, replacement of the NVRAM battery backup IC, cleaning the inside window of the alphanumeric display, internal adjustment of display brightness (if needed), other minor repairs that may be needed, and calibration of the offset and distortion trims. Upon completion, we do a complete 108 point check out of the analog and digital sections using Eventide’s proprietary H3000 test software, replace any missing or damaged chassis screws, and use a paint pen to touch up scratches in the black areas. For users in areas outside of North America, we have a small quantity of alternate version power transformers that are optimized for 50 Hz. power.

Note: in recent years many H3000’s have come to us with dead power supplies, sometimes with customer comments about smoke from the motherboard and burning smells. These problems are nearly always caused by shorted capacitors, which can cause additional failures in the power supply circuits. In these cases repair and testing can be very time consuming because the motherboards have dozens of capacitors in parallel, there’s no easy way of individually testing them, and often many (or most) need to be replaced. These problems can always be repaired, but additional cost is often $200-$250.

Eventide is an amazing company with a long history. We’re glad they’ve survived and thrived, and have remained independent, still true to their original design mission. Right on, Eventide!